Shanxi Province, China. Women’s Rights Without Frontiers has learned that a woman was forcibly aborted at seven months of pregnancy on June 3, 2012. 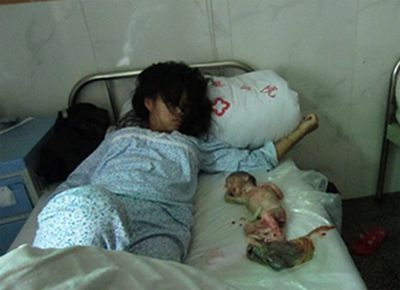 According to an internet report, the woman, Feng Jianmei, was beaten and dragged into a vehicle by a group of Family Planning Officials while her husband, Deng Jiyuan, was out working. The officials asked for RMB 40,000 in fines from Feng Jianmei’s family. When they did not receive the money, they forcibly aborted Jianmei at seven months, laying the body of her aborted baby next to her in the bed. The woman is under medical treatment in Ankang City, Zhenpin County, Zengjia Town, Yupin village.

Reggie Littlejohn, president of Women’s Rights Without Frontiers, stated, “This is an outrage. No legitimate government would commit or tolerate such an act. Those who are responsible should be prosecuted for crimes against humanity. WRWF calls on the United States government and the leaders of the free world to strongly condemn forced abortion and all coercive family planning in China.”

Why Chen fights, and why U.S. abortion rights supporters should care